Stop Looking to Northern Europe and look at the Deep South

Last week I shared a video about bicycling in Groningen, Netherlands "the World's Bicycling City." When you watch the video, I'm sure you are like me and think, "that'll never happen in America." But it already did happen! And it happened not in Portland, or New York City or Minneapolis but in the Deep South: in Montgomery, Alabama!


A few years ago I arrived in Atlanta with time to explore the Sweet Auburn Historic District before the opening session of the New Baptist Covenant Summit on Racial Justice and Reconciliation. As I stepped off the streetcar at the King Historic District stop, I looked up the street at Ebenezer Baptist Church and noticed the familiar 4-foot-wide, white-striped bike lanes. 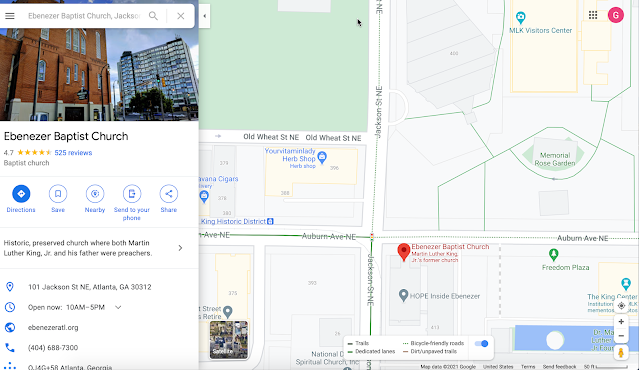 The presence of bike lanes made me wonder if there could be a link between bicycling and the Civil Rights Movement. The linkage seemed far-fetched at first, but as I watched people of all backgrounds bike past the churches and home of the King family, I began to think otherwise.

Take a moment and recall the transit images and landmarks of the Civil Rights Movement: Plessy v. Ferguson, the ruling that gave us the language of “separate but equal,” was a case about who could and who could not ride on passenger rail cars. Or picture the charred remains of the bombed Freedom Riders Trailways bus. Or picture Rosa Parks with her purse in her lap, refusing to give up her seat on National City Lines Bus №2857. Or picture the marchers locked arm-in-arm walking across the Edmund Pettus Bridge. Each revolved around transit issues. Movement — how African-Americans got from point A to point B — was central to the Movement.

I knew transit issues were central to the Civil Rights Movement, but I had not thought of bicycling as part of the movement. Then during an Internet search, I discovered a picture of African-Americans on bicycles passing empty buses during the Montgomery Bus Boycott. Bike lanes on the corner of Auburn Avenue and Jackson Street in Atlanta were placed in the most appropriate streets.

In most conversations, bicycling is viewed, promoted and dominated by white voices. But when white voices look at the historical experience of the Montgomery Bus Boycott, they realize how much the African-American community has to teach.

On the morning of Dec. 5, 1954, the boycott began when African-Americans, inspired by the Baton Rouge, La., bus boycott, refused to take the bus because of Jim Crow-era transit laws. For 381 days, the African-American community carpooled, took taxis, rode bicycles, walked and even drove horse and buggy to work and for errands. Decades before there were bike lanes, before the Nordic nations embraced bicycling, before Silicon Valley entrepreneurs developed ride-sharing apps, before there were any pedestrian-advisory alliances, the African-American community in Montgomery, Ala., had already created what many transit planners can only imagine in their dreams!

The Montgomery African-American community protested, resisted, organized and pressured local and national elected officials, but they also created an alternative community and reality. Despite daily dehumanization and disenfranchisement, they did not wait for a political party to save them. They, like the early church in Acts, chapter 2, created a new reality by means of protest and alternative transit.
(Note: Portions of this blog first appeared as an article I wrote for The Christian Citizen) 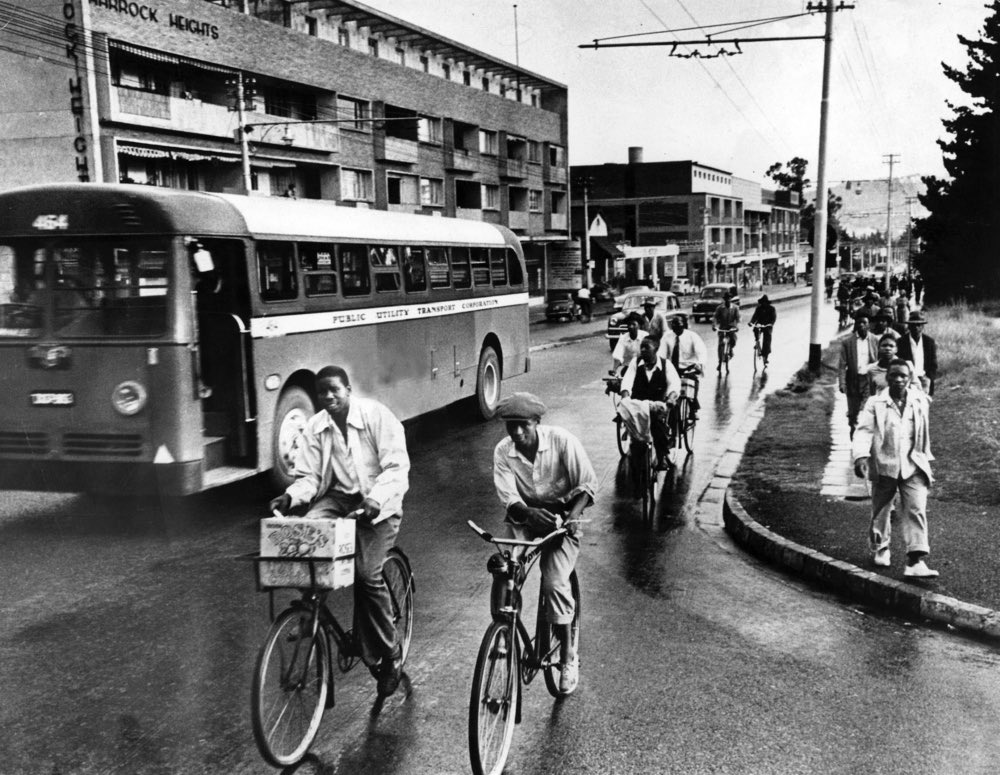 But white America did not follow the lead of our Black brothers and sisters and neighbors in Montgomery.
I live about a 10 minute bike ride from the location where George Floyd (aged 46, like myself) was murdered on May 25, 2020. 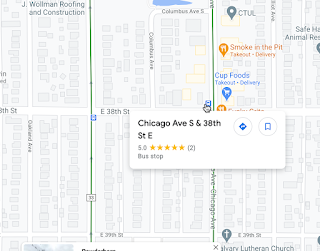 His death sparked a change in the city and in the world.  The intersection where he died has become a modern day shrine, renamed by the Minneapolis Park Board as George Floyd Square. 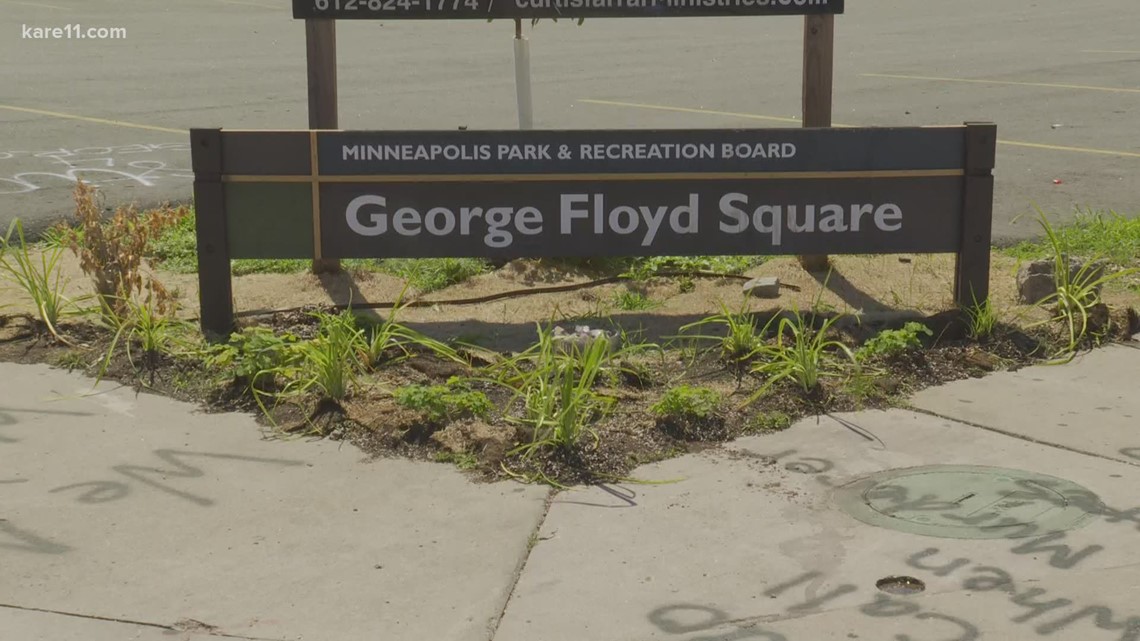 For eight months+ local residents and activists have created a two block square autonomous zone around the site.  No cars (except for residents, deliveries and emergencies).  A major bus route (in fact, Metro Transit's busiest route, the #5) has been rerouted.  The gas station pumping area is now a free bike repair station.  Parking spaces are now garden plots, free libraries, artists stalls.  The intersection of 38th and Chicago is a public art space.  The streets are now canvases for art work, calls to actions, memorials.  I'm sure soon the area will be reopened for traffic, but it doesn't have to be.

As I bike around the neighborhoods around I am buoyed by the transformation of the streets.  Some artists recommissioned the Bike Boulevards as BLM💚 Boulevards and encouraged all to get into #GoodTrouble. 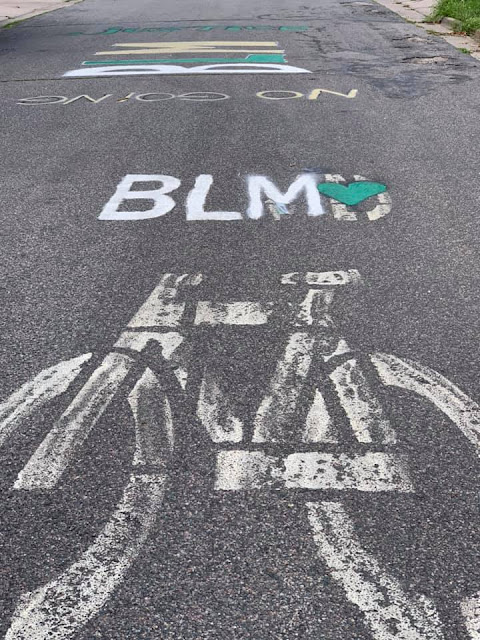 We do not have to travel to the Netherlands or to Copenhagen or even Paris, maybe all we need to do is bike down to the 38th and Chicago in Minneapolis or open our history books to the Montgomery Bus Boycott and we can find the answers we've been looking for are right in front of us. Maybe all white America needs to do is to look at the prospects of the Beloved Community modeled and shared with us by our BIPOC brothers and sisters and neighbors.
Posted by G. Travis Norvell at 10:16 AM