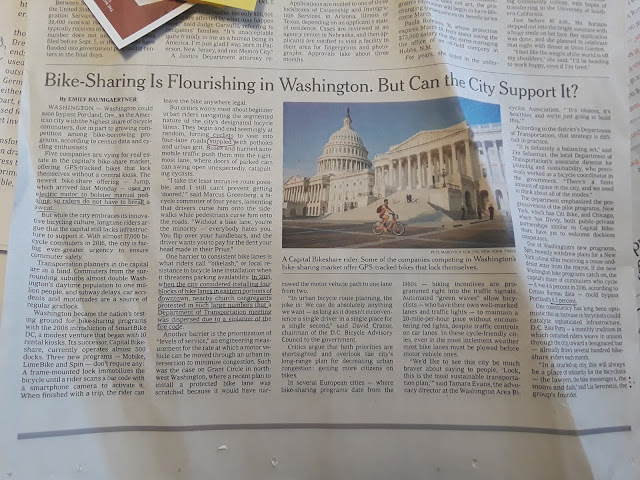 About halfway through the piece my eyes nearly popped out.  Why? bikes and churches were mentioned in the same article.  Unfortunately, the mention was not in a positive manner. The issue mentioned centered on the disruption of parking due to proposed bike lanes.  For the record, I have nearly an entire chapter devoted to parking in my book proposal.  I had to find out more about the issue.  Using the google machine I bird dogged down the bike lanes and churches back story.

In 2015 churches, African-American churches, protested the proposal of a protected bike lane in front of their churches.  One deacon was quoted saying, “This ain’t London, this ain’t Europe. The United States is built on the automobile and we need to respect that."  The deacon is exactly right.

I would like to see churches adopt biking and the beautiful benefits of bike parking.  But I don't think the best way to do that is to plop(impose) a protected bike lane in front of historic African-American churches.  Especially, when African-Americans drive, with a higher than average percentage, from their homes to their churches. The African-American church is a thriving (and sometimes strained) and meaningful institution that should be honored and recognized when the issue of biking (and bike lanes) is proposed.  Should historically disenfranchised institutions bear the brunt of alternative transportation plans?  NO.  These institutions and communities have bore the brunt of transportation decisions for decades.  Instead of disrupting their communities these communities should be first and foremost in the conversation.  Listen first then look to Outreach, Partnership, Communication, Education; not disruption and taking away of parking spaces.

On the one hand the sentence in the article is a sad mentioning.  On the other hand I see it as a generative idea for not what to do.  If the narrative or assumption is that biking is an activity for the privileged and historically disenfranchised must adapt to the privileged activity then the expansion of biking is dead on arrival. To make biking equitable the biking community must do its homework, tenderize consciences, and be open to alternatives.  And listen to this piece from MPR news.

I think churches can be leaders in this realm, I hope so.

Post-script.  Have any of you ever seen the word "stippled" in print?

Post-post-script the idea of e-bikes in a bike share program is pure genius.