And on the Third Day He Rode Again...

I think the Jesus on a bicycle t-shirts with the quote "And on the third day he rode again" on them are pretty clever. 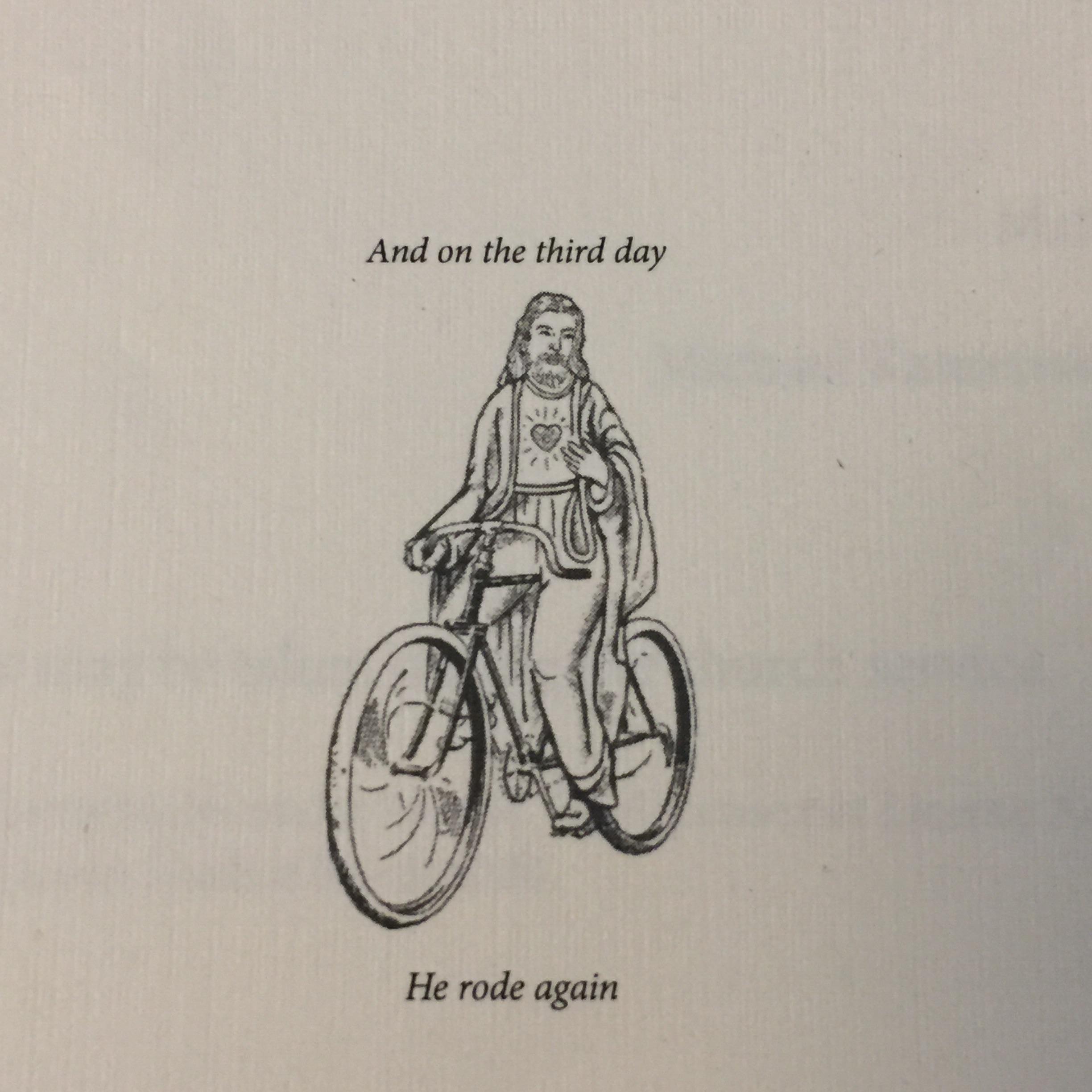 I need to get one for Easter 2022.
In seminary I remember Jon Singletary one day after lunch figuring out his afternoon commute with a bus schedule.  I thought that was really cool and wanted to emulate him, but I was clueless where to start.  I could have asked Jon.  After transferring to CRCDS I lived just a few blocks from school so I walked almost everyday, then in my senior year started riding my bike, a used Motobecane road bike I bought at a yard sale for $100, to class and around the city .  However, there were no bike racks at the school, so I locked it to a tree.  I never saw another person ride a bike to divinity school.
In fact, I never saw anyone bike to church or take the bus to church until I moved to Minneapolis.  I suppose a few people did take the streetcar in New Orleans, but not many.  But that didn't mean there were not influencers in the theological world.
One time Dr. Harvey Cox, of Harvard Divinity School, was the featured speaker at the Rhode Island Council of Churches luncheon.  For some reason I was sitting at his table, probably because I was the youngest clergy person by 30 years in the room (and the Executive Minister was a friend).  Anyway, there was a great hubbub over his arrival, he was late.  The reason?  He took the train from Cambridge to Providence.
Theologians take public transit?
At the table Cox explained he was late because the train was few minutes late.  Then he uttered those magic words, "I don't own a car."  And just yesterday while listening to a recording of The 1984 Lyman Beecher lectures by the late Krister Stendahl I heard him utter this request, "If anyone is going to Cambridge tomorrow, can I ride with you.  If not, I'll take the train."  New Testament scholar, Dean of the Harvard Divinity School, Bishop of Stockholm didn't drive himself from Cambridge, MA to New Haven, CT!  But this really should come as no surprise, even folks who work on cars in Cambridge, MA don't like cars.
Which brings me to this wonderful paragraph found in the equally wonderful biography of Howard Thurman, Against the Hounds of Hell: A Life of Howard Thurman by Peter Eisenstadt, (I'll post a full review in the coming days.  This is a book I have to read slow, so I can digest it fully).

And then there is the beautiful essay, "Taking the Train: A Theological Journey through Contemporary Los Angeles County" by Shelia Briggs in Spirit in the Cities: Searching for Soul in the Urban Landscape, edited by Kathryn Tanner (I love that you can purchase this book at Target!).
All to say, I think these theologians are telling us something!  You can be a fecund pastor-theologian and not own a car, or drive one all the time!  It seems Jesus did pretty good without one. 😉
Posted by G. Travis Norvell at 9:44 AM