Pardon me Mister Inertia we need you to move so we can become The-Best-150-on-a-Sunday-Liberal-Church-in-America. We said MOVE!

This is a first in a series of posts about revitalizing a liberal mainline congregation.  I am 44; I have not desire to go to another church; I have no desire to be a part of a large church.  I know my strengths are in pastoral sized congregations (less than 200).  I've dreamt that maybe my legacy in church life would be that I helped a congregation go from making it to flourishing.  I'm at a good church, Judson Memorial Baptist Church (our web page is under construction) but I know if I don't get my act together my work will be described like the work at a previous church I served, "Yeah, Old Fred rested on his laurels.  That church could've been something if Old Fred had not rested on his laurels."  I don't want to be the Minneapolis version of Old Fred.  I know there are many currents going against a mainline liberal church making it, but can I at least we gave it everything I got...

Last summer my family and I were on pilgrimage in Scotland and Northeast England for my sabbatical.  The trip was amazing and transformational.  We visited every chapel, sanctuary, cathedral and holy site we could.  After the trip I described our experiences in the religious places with three "Ds": Dark, Dank, and Dead.

The Three Ds gave/give/still give me many head and heartaches.  If the 3Ds could happen at a, once flourishing, cathedral then it could definitely happen at Judson Memorial Baptist Church too!

Before the trip I viewed Judson as a great church, maybe even a mega church (in liberal American Baptist circles).  We average a 100+ in worship, we have a balanced budget (sometimes even a small surplus), we have kids and youth and young families present (our vice moderator is under 50), great music, people with the ability and vigor and strength who can literally move things (like chairs and tables), we have a lovely building and we have an above average pastor (throw me a bone here folks).  But after the trip I viewed Judson with new eyes...honest eyes: despite our current "goodness" the 3Ds aren't that far away (yikes).

But what to do?

I was trained in a model that assumed liberal Protestantism would continue to exist.  There was talk of a great sea change coming in American Christianity, but there was not a sense of urgency undergirding my divinity studies.  So I did what most well-meaning, scared $h!tless, pastors do: I tried to bury this fear deep down in my soul.

Two events, however, brought my fear to the surface again and again.  They made me look at my fear and realize it's not as scary as it seems.

The first event was a workshop in September of 2018 led by Rev. John Pentland at Baptist Temple in Rochester, NY.  John was there at the request of Rev. Alan Newton, part of Alan's retirement weekend.  John offered a workshop on his book Fishing Tips.  Alan had sent me a copy of the book ahead of time, but I didn't pay much attention to it.  Due to my acute case of knowitallness, I read the first couple of pages then put the book down.  I attended the workshop really out of loyalty to Alan, I said, "Ill go to the workshop because of Alan."

After five minutes into the workshop I was transfixed; Pentland was describing a flourishing version of Judson Church in Calgary, Alberta Canada! After ten minutes I didn't think I would have enough room in my notebook to handle all of my notes and ideas.

Now reader, here is the irony.  In divinity school in 1999-2000 I started a church as part of my senior project, it was called God Talk (I know terrible name).  The church was designed for folk who were de-churched or un-churched.  It was centered around a meal (usually designed and prepared by my lovely bride, we even made venison chili once), conversation, a reading, a story, a song.  It was never large, but it was formative.  People would come once, exhale; then share too much, too soon and then never come back.  At the time I didn't have the skills to say slow down.  And then I graduated in May of 2000 and largely left all the energy and experiences and learning from the experiment in Rochester, NY.

The irony, you ask?  Where is the irony?  The workshop was offered in the Fellowship Hall of Baptist Temple, the very room where I offered God Talk!

When I got back to Judson I started tinkering with the worship service, I started to see where changes could be made.  But nothing too big.

Then the second event in October of 2018 50 people from Judson went on a Racial Justice Pilgrimage to Memphis, TN.  The trip was transformative again on many levels but in a surprising (for me) it made me think seriously about leadership.

Then Advent where I announced the death of Judson and the resurrection of Judson (when the Spirit says jump...).  And then when I was struggling over whether or not to offer a formal vision for the congregation an angel, literally, came up to me at the coffee shop and said, "Sometimes as a pastor you just gotta lead."  The angel was rather longwinded and went on to say a bunch of other things, but I got the point.

And then good old inertia taunted me with, "Sucker, you really thought you were gonna move me".  But thanks to Emily Winter we embraced risk and fooled Mr. Inertia.

Yeah, Mr. Inertia I do think we're gonna move you!

In a dream I was at a dinner party having a conversation with the person next to me and they said, "Why don't you lobby for Judson to become the best 150 worshipping on a Sunday liberal church in America?"  I woke up and saw the phrase as one long dashed together word.

And that is what we're (Judson Church and myself) doing.  How to do it?  What does that even look like?  I haven't a clue.  That is why I'm in a months-long process of relearning how churches do this.

Thus far this is my pile of books (one can read one of these books in a day or every two days and because no one thinks there is any future in these books I find them for a $1 or $2 at used books shops and on AbeBooks.com) 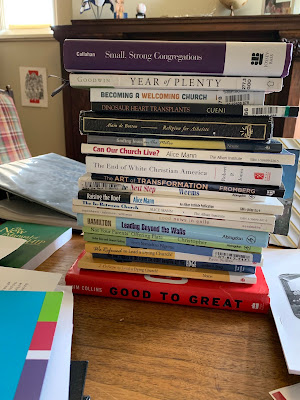 I've got another pile just as high to go through (plus others that I don't know where they are). 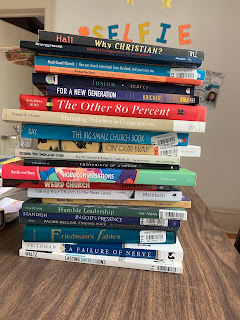 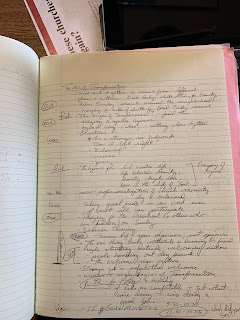 Normally, I would make notes in the book and then move onto the next one.  But this endeavor called for more thoughtfulness on my part.  (warning long run on sentence fast approaching) Because I knew I would never recall everything I read or what book it came from I got a heavy duty notebook, a field/lab engineer kind, and started making notes, copying quotes and indexing why I wrote the stuff down in the margins.

It's extra for sure, but it's the only way I can keep track of the stuff.

There are not many books specifically tailored to mainline liberal churches (and that's okay). Do you have other titles?
There are not many people giving this subject serious work and concentration (because we're all hanging on by our fingernails). But there are a few like Mike Piazza. I'd love to find a list of thriving, flourishing liberal mainline churches.  And I'd love to go visit them.