Donuts are my kryptonite, no doubt about it.  My deepest fear is that years from now my doctor will tell me that in order to continue living I'll have to cease to eating donuts.  Take away beer (or any form of alcohol), take away coffee, all manners of chocolate, but to think about a future without donuts...

But donuts are more than just donuts.  For me they are revelations of the pastoral life.  One of the most truest forms of grace happened a few years ago when a parishioner (whom I butted heads with on several issues) was working in the southern part of Rhode Island one day and despite our flare ups, stopped by the world's greatest donut shop and bought me a donut, then drove to the town where the church was at and bought me a cup of coffee, then brought them both to the church for me to enjoy.  It was an amazing and delicious donut, but more than that it was the thought and grace behind the donut and the act that transformed that mixture of oil, flour, water and sugar into the bread of life, albeit sugary and fatty bread of life.

Now I'm ready to tell you about the donut here at Judson...

In August I celebrated my fourth year of service as the pastor of Judson Memorial Baptist Church in Minneapolis.  I knew from day one that my soul had found a home with this congregation.  And I knew I was at the right place when congregants wanted to talk with me about their favorite donut shop.  And I especially knew I was at the right place when after just a few weeks of being on the job a gentleman walked into my office one day to give me two plain donuts for my morning coffee break.  Like I consume all donuts I devoured it in a few bites (kind of like that video of the hippopotamus eating a watermelon).

As I went to tear into donut #2 someone else knocked on my door.  Not wanting to be rude and offer them a whole donut un-soiled by my grubby/sticky/donutty hands I quickly placed the donut in the top drawer of my desk.  (Now reader you need to know that I have two offices at this church.  A downstairs office, where this scene took place, which serves as my "public" office.  And an upstairs office which serves as my study.  You also need to know that I don't like to spend much time in the downstairs office because there are no windows in it and the lack of sunlight coupled with the glare of a computer screen triggers migraines and that my lack of time in the downstairs office lends more credibility to what I'm about to tell you).

A few months later I opened the desk drawer that I placed donut #2 in.  And to my disbelief the uneaten donut looked exactly like it did when it was first given to me (think of the macdonalds hamburger in Super Size Me).  So every few months I take a gander at the donut and it has remained the same. 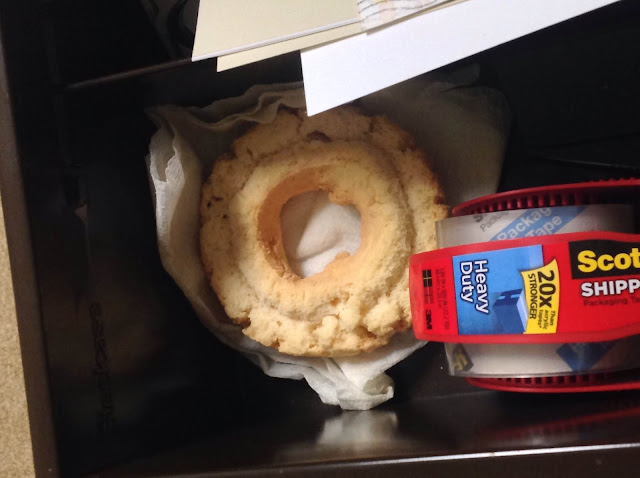 like the Oaks or Mamre, or the 12 rocks the Israelites gathered from the Jordan...years from now the donut of Judson will be described in the language of Holy Writ as "it is there unto this day."