Bike Commuting Reports: How Did They Come About

While reading Katherine Kayhoe's book Saving Us: A Climate Scientist's Case for Hope and Healing in a Divided World I took my time with chapter seven, The Guilt Complex.  When I'm in a conversation about walking, bicycling, or taking public transit I often sense guilt arising in my conversation partner.  And I quickly try assuage their guilt with, "I have a van, my wife and I drive it all the time."  In all honesty, the last thing I want to do as a religious leader is make people feel guilty (I had enough of that in my early religious experiences).
Then I read chapter seven!
In chapter seven I read this sentence, "Peer pressure is effective when there is a viable alternative."  Rather than try to take on the guilt someone else experiences because of my transit choices, provide them instead with viable transit alternatives. This seems so simple, but it was a practice I had never considered.
In the Twin Cities walking, bicycling and taking public transit are viable alternatives.  For every situation and destination?  Nope.  But for a lot of situations and destinations: Yes.  And yet I never invite others to explore these viable alternatives, unless they specifically ask me about them.
The morning after finishing Hayhoe's book I sat at the table, drinking coffee and listening to Cathy Wurzer give the traffic report on MPR, "there's a car fire on 35E; a semi has jackknifed; it's slow going for everyone."  Then a fully caffeinated💡 emerged: what if MPR provided bike, walking, transit stop conditions too?  So I tweeted Cathy Wurzer: 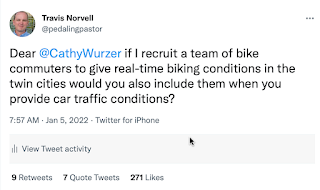 I was blown away by both her generosity and the response on twitter.  For the record:  my normal nerdy preacher/biking tweets get one or two likes.
The goal was two-fold: One, 'normalize' walking, bicycling, and taking public transit as transportation.  I know from my traversing all over the Twin Cities that many people walk, bike, and take public transit for work, for school, for leisure, to shop.  People get around more than just by automobile:  walkers, bicyclists and public transiters are traffic too.  The report it normalizes these forms of transit too.  Two, it shows that there are viable alternatives to the automobile in the Twin Cities, even when it is -10°.  And a little lagniappe: people enjoy them! 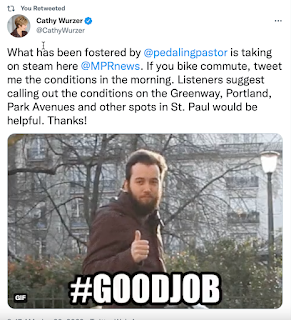 Kudos to Cathy Wurzer and MPR News for be open and willing to reading the bike lane reports.
Postscript:  Since the reports started airing my twitter followers has increased exponentially, so I thought I ought to share a little about myself in the form of two pictures.
In my mind this is how I picture myself as the pedaling pastor (that's Canon Rev. Sidney Chambers, priest/detective on the PBS show Grantchester). 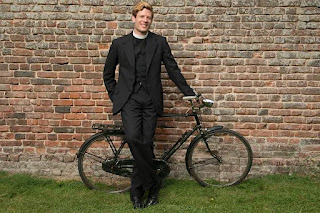 and here is what it is really like to be the pedaling pastor as I park my bike outside of Judson Church: 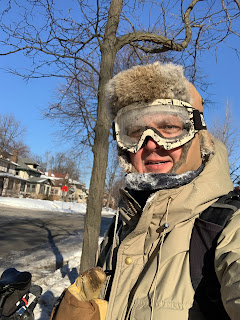