Dale Edmondson (former pastor at Judson) emailed me this week to tell me a great man had died: Bill Herzog (Dale and Bill were close friends).  Bill was here at Judson when Dale was installed on April 22, 1990. 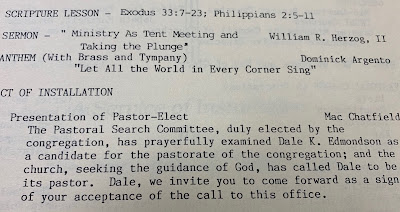 Others knew Bill much better and longer than I did. Like many of you I loved Bill Herzog.  But I felt compelled to share some of my experiences with this great man.  He was more than my New Testament professor, more than a mentor, more than someone I admired, he was more like a godfather - someone who revealed how to be an authentic, compassionate, a devoted father and husband, and a loving human being.  He was a divinity school version of Mister Rogers (Rev. Fred Rogers gave the commencement address at CRDS in 1994, this is my favorite picture from that event). 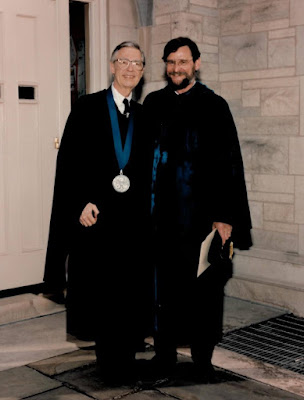 I first met him via VHS tapes: the famous 1996 homosexuality debate he did at Green Lake with Manfred Brauch (I'll try to find a copy and upload them to youtube). I thought this guy is amazing and this guy needs to grow a beard. I believe he told me his wife said the same thing about the beard. Later, I would discover not only did he like the American League, but he was a Boston Red Sox fan. If I had known this...

After college I was too afraid to venture too far from home in West Virginia for seminary, so I attended BTSR in Richmond, VA for two years. But at the end of my second year I knew I needed to transfer to CRDS. I cold called Bill Herzog (he didn't know me at all) and said, "I'd like to transfer to CRDS". He replied, "Sure thing, when do you want to come up for a visit? We'll pay for your flight up." I said, "no need for that Lori and I will drive up for the weekend." to which he added, "Sure thing, and if you all want you can stay at my place."

We didn't stay at his place, but we did meet him that weekend. When I told the admission office Herzog said the school would pay for our flight they nearly fainted. I told Dale Davis (then director of admissions at CRDS), no worries, we drove.

I wouldn't say he was a great administrator, why was he a perpetual dean? But he had a great sense of style (great wool suits). He excelled in the classroom. As a professor he was giant; he would push you but not to the breaking point. He demanded quality work, but he also wanted to know you as a person. I once turned in a paper to him and he gave it back to me saying, "It's a good paper, but it's not a social gospel paper. If you're going to write like a social gospeller then you've got to write clear for both the person sitting at the bar and the person sitting in the pew."

I took two independent studies with him on the historical Jesus and social justice. For two semesters I got weekly private one hour sessions with Bill Herzog! It was amazing. We would not discuss his work, he had ethics! A book a week, it was brutal but well worth it. I think he had a theology book in him but it never came forth. It would have been a book that combined liberation theology, with New Testament social sciences and ecclesiology. He hinted at this in his books, but during the private sessions he really became animated about this idea.

He had a wicked sense of humor, he loved to laugh. He loved to tell stories (usually, they were too long). A classmate of his in seminary, David Bloom has a picture of Herzog wearing a sweatshirt with Snoopy on the front. Bloom said,  "On the occasion that we would meet going in opposite directions while changing classes, he would say to me out the corner of his mouth, "There's no excuse for you, Bloom!" 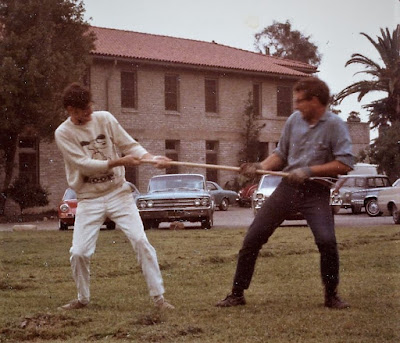 He was also a great preacher. During chapel services he would take on a biblical character and preach from their perspective. He loved doing Peter. Most Sundays one would find Bill working as an interim at local American Baptist congregations or teaching Sunday school (especially the great gig he had at the Episcopal Church). I once asked him about the balance between the pulpit and the academy. He said, "you have to incarnate the tension". I thought at first that was just divinity school bs, but I think better of his advice now.

Every year he would have the Baptist students over to his house for an end of the year cookout. During my senior year I recruited him to be the pitcher for our divinity school slo pitch softball team (terrible team, but great fun). Herzog threw a curve, a knuckle and a quick pitch. He said there was no way Chris Evans (Chris Evans was then professor of Church History at CRDS, he is now at Boston University; they also co-authored/co-edited a book on baseball, see below for more info) could hit his curve, I believed it. The loser of each game got a pitcher of cheap Genesee beer, we had all the Genesee we wanted that season.

Bill left CRDS and took one final position as Dean of Andover Newton Theological School in Newton Centre, MA. At the time I lived in Lincoln, RI, so I would drive up from and see him every now and then. He loved it at ANTS, well he loved getting his Red Sox clergy pass at least.

Most see Herzog's influence in the work of his former student Ched Myers. But I see his influence in the 100s of alums, friends and associates - people of integrity, those who think pastoral scholarship matters, those who don't take themselves too seriously, those who genuinely listen to you and don't look through you, those who enable you to see the kingdom of heaven for just a few bright moments.

When he was in New Orleans for the SBL annual meeting I invited him to come to the church I was serving to preach and teach.  He had the congregation in the palm of his hand, they were in awe of him.  As I drove him out for lunch he started asking me questions about pastoral life then said, "Aha, you're a problem solver, you're officially a pastor!"  I made a face and said, "I guess so."  He just smiled.

the picture is from my graduation from CRDS in 2000. as you can tell from the look on my face (and from Bill's) he just said to me, "And now for the rest of your life you get to be an American Baptist pastor!" (i told you he had a wicked sense of humor) 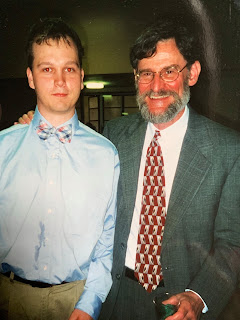 Parables as Subversive Speech: Jesus as Pedagogue of the Oppressed, 1994
Jesus Justice and the Reign of God: A Ministry of Liberation, 2000
The Faith of Fifty Million: Baseball, Religion, and American Culture, 2002
Prophet and Teacher: An Introduction to the Historical Jesus, 2005

plus other articles in many academic journals.