Incentivizing Bicycling or Paying My Children Not to Drive

In 1988 License to Drive appeared on the big screens; I was 14 at the time, I thought like most teenagers the greatest way toward freedom was a drivers license. 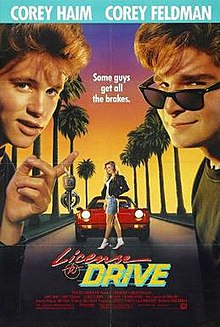 Just like Corey Feldman I ditched the bike (a sunset orange 78lbs Schwinn Continental with front headlight, white plastic bike pump, under the seat basket, and clown honking horn) and started driving my father's truck (a 1983 Chevy Silverado) with delight.

Foolishly, I thought I could go anywhere anytime I wanted: Myrtle Beach for the weekend (in WV this was where you vacationed), up to Williams River to trout fish, to the movies, to hang out with friends, & etc... But there were lots of holes in my theory, primarily scarcity.

In my family we only had two working vehicles, the two my parents used for work.  That meant I could only use one of the vehicles, at most, when my parents were not working during the evenings and on the weekends.  Then there was that other aspect of scarcity: money.  Driving cost money: insurance, gas, maintenance, wear and tear and money I did not have. Then there was that other aspect of scarcity: interpersonal - I really wasn't all that popular, I did not date in high school and I was a burgeoning introvert.

I soon discovered that driving, rather than providing me a rush of freedom it provided me with the disappointing experience of being trapped.  Odd how in just a few weeks I went from a teenager who rode his bike all over town to a licensed driver who wouldn't even think of biking, walking or taking the bus to his destination when he did not have access to an automobile.

If I had only stayed with the bike, walked around town and learned the bus system...

It took me twenty years to get back on a bike, but not the Continental (years ago I heard it was being used as an anchor for an ocean worthy vessel in Lake Erie).  When my oldest progeny approached 16 I had to find a way to make bicycling, walking and public transit more attractive than driving.  For the record my oldest loves to bike, walk and take public transit.  But I knew this love would not be enough for the onslaught of societal pressure to get a drivers license and start driving.

Pause for a moment and think how difficult this is in our culture:
-Main form of identification: drivers license.
-Class offered at school: drivers education.
-ratio of parking spots at schools for car vs bikes
-sports programs that do not have busing
-pop culture images of driving (when was the last time you saw a bike commercial on television? a teenager in a movie forgoing a car and biking instead? a song on the radio about biking or walking or taking the bus?)

I thought and thought about this, even prayed about it.  Then the idea occurred to me: why don't my lovely bride and I just pay my progeny not to drive?

I called up my insurance agent, did some internet explorations, computed some numbers, talked it over with my the above mentioned lovely bride and came up with a number: $50 a month.  It was going to cost us around $50/month to add our oldest to our auto insurance (that's with multiple line, good grades, and drivers ed deductions)

Here is how it works. We pay our oldest child $50 a month not to drive a car.  We also put $20 a month on a bus card and purchased a new bike for this young adult.  It's a small investment to hold off the automobile/drivers license temptation during this time of peer pressure, cultural pressure, and out of control capitalist pressure.  Will it last forever?  Probably not, I see this young adult sometime getting a drivers license. But if we can help this person see that car ownership is not necessary for life in a city (and in college) then I think we can help this person imagine an alternative life that is healthier, cheaper, and environmentally friendlier than a car-centered one.

Did your parents ever pay you not to drive?  Did you ever ask your parents to pay you rather than put your on their auto insurance?  How do you keep the love of biking, walking and public transiting more than the desire for a license?