The kiddos told me I was obsessed with Mister Rogers, I told them I was not.  My book list for February 2018 tells me otherwise.

1.  Peaceful Neighbor: Discovering the Countercultural Mister Rogers by Michael Long.
On the one hand this book revealed a side of Fred Rogers that disappointed me.   Mister Rogers did not advance racial reconciliation on his show as much as I wished (but he did advance this topic), he did not advance LGBTQ rights as much as I wished (but he was a member of a More Light, pro-LGBTQ PCUSA congregation in Pittsburgh).  On the other hand I learned to appreciate his implicit and subtle work for racial reconciliation, economic justice, peace and non-violence, and gender equity.

2.  The Little Prince by Antoine de Saint-Exupery
One of Mister Rogers' favorite, and now one of mine too.  "What is invisible to the eyes is essential"

3.  Many Ways to Say I Love You: Wisdom for Parents and Children from Mister Rogers by Fred Rogers
A collection of sayings, stories, aphorisms from Mister Rogers' show, speeches and writings.  Great stuff.  Made me want to start a Continuing Education class for the parents at the preschool.  How do you raise children with the principles of nonviolence?  This idea is not taught at the hospital after the birth of a child or offered at community centers.

4.  Wise Trees by Diane Cook and Len Jenshel
Fantastic pictures and stories behind "wise trees"  I had never thought about the permanence of trees and their allure.  This book inspired me to make sure we visit the Fortingall Yew in Scotland, perhaps the oldest living thing in Europe, maybe 5,000 years old.  Also, the stories of the survivor trees were amazing (Nagasaki, Hiroshima, Oklahoma City, New York).

5.  Mr. Rogers: Young Friend and Neighbor by George Edward Stanley.
This is a children's biography book.  It was great.  I loved it, great insight into Fred's childhood and how those moments shaped his life.

6.  Hidden Figures: The True Story of Four Black Women and the Space Race by Margot Lee Shetterly and illustrated by Laura Freeman.
"Picture book" but amazing still.  I am still shocked by the impact of the HBCU West Virginia State College in Institute, WV (across the river from my hometown of St. Albans, WV)  I was ignorant of its story, its impact and its legacy.  But i'm trying to make up for that now.  Katherine Johnson was a graduate.

7. Life Journeys According to Mister Rogers: Things to Remember Along the Way by Fred Rogers
Another book of quotes, another great resource.

8. The Giving Box: Create a Tradition of Giving with Your Children by Fred Rogers
This is a beautiful stewardship program!

9.  The Gospel of Mark
Gee Whiz this book is violent.

10.  Hide and Seek by Ian Rankin
Another Edinburgh murder mystery.  Maybe we should just skip our days in Edinburgh and go straight to St. Andrews...

11.  Fred Rogers Writes and Sings About Many Ways to Say I Love You for People Who Care About Children by Fred Rogers.  Published by Judson Press, so maybe Fred Rogers is an honorary American Baptist :)  Although small this is a gem.  1.  It is the most Christian of his books that I have read thus far.  2.  It tells the stories behind his songs and presents them first as poems.  3.  Musical scores for six songs.  4.  A very thin 331/3 EP is included!!!

12.  Creative Ministry by Henri Nouwen
You he and Fred were good friends, of course they were.  I like Nouwen because he confronts me with his faults which are mine too.  "The most intimate is also the most general"  The last chapter about the balance between action and contemplation I found especially helpful. 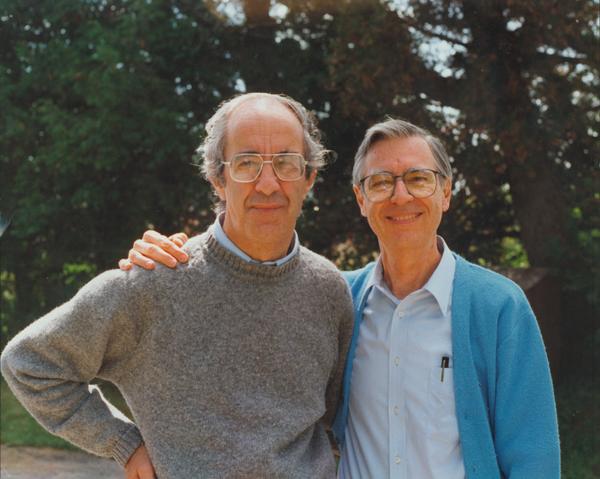 in march, more Fred Rogers, preparatory books for the pilgrimage and bike books.  Yes, I am working a chapter in the bikeable parish book about Fred Rogers.