A few months ago Bill Lindeke and I sat down for a beer and a chat about bicycling and churches.  During the conversation Bill noted the importance of Mr. Rogers, maybe even calling him the first urbanist.  I had never thought of Mr. Rogers as an urbanist but as soon as Bill said it sparks started flying all over in my mind.  (And if you haven't read Bill's prayer for Streets and Sidewalks that he shared at the Christmas Eve service, you must, you must.)

But I never followed up on the Mr. Rogers sparks, perhaps because Bill filled me with even more great ideas.  Then a couple of weeks ago when I was could not picture the path and contents of the fifth and final chapter of a book I am working on Mr. Rogers popped into my mind and then that familiar song started playing in my mind, "It's a beautiful day in this neighborhood.."

and then the chapter started coming together.  Since then I have been reading all I can about Mr. Rogers.  On the one hand his material provides a great resource for the fifth chapter, on the other hand I am finding my pastoral practice being changed by his life and habits and values.

For the record, you know that Mr. Rogers was an ordained Presbyterian minister.  Ordained not to pastor a church or preach from a pulpit but to produce children's television.  And did you know he and Henri Nouwen were great friends!  Can you imagine the conversations between those two, oh I bet they were beautiful conversations.

I started thinking, "I bet Mr. Rogers had something to say about bikes."  Sure enough there are more pictures on the internet of Mr. Rogers riding a bicycle than there are of Mr. Trump riding one (couldn't resist). 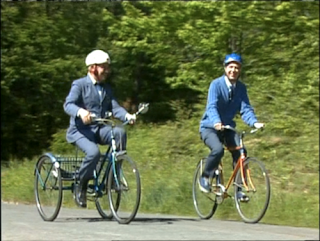 And in Mr. Rogers books you will find plenty of references to bicycling and walking and public transit.  This paragraph below is a sermon just waiting to be preached: 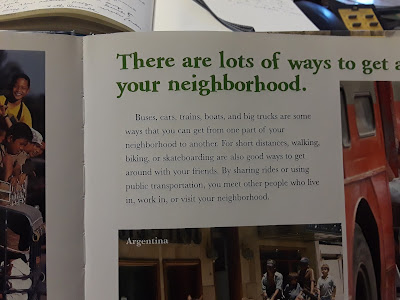 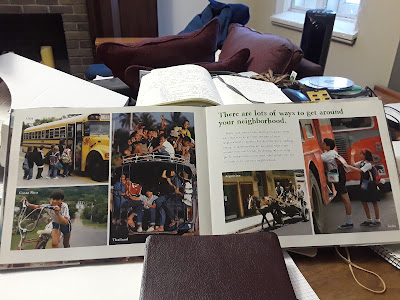 Here is another benefit of my Mr. Rogers research.  There is no better way to refresh your brain and soul than to turn off the news and replace them with Mr. Rogers stories.