Exploring the 2-3% Rule.  First off, I don't know if this exists as an official "rule" but I am treating as one.  Second, I learned of this "rule" by a friend who teaches at a local university and is one of the smartest people I know.

Here is the rule, interpreted by me: To bring about lasting social change one should look to advance the cause 2-3% each year.  Anything more is too much of an upset to the system and the system will look to revert back to homeostasis (for those of you familiar with pastoral care theories...the language works well).  Over the course of time, from the outside, it will appear as if there were sudden lunges or lurches or leaps toward social change.  However, the leaps were due to the incremental 2-3% changes each year.  Think of an icicle melting, at the first experience of warmth an icicle doesn't just fall off the eave.  It melts and drips and then finally falls off.

Four winters ago I began biking and walking and public transiting and car-sharing (the service I used no longer exists) as a way to move around as the pastor of Judson Memorial Baptist Church.  The shift in movement brought about lots of immediate change: better health, financial savings, weight loss, got to know the Twin Cities better, and self-image improved.  But the change was my own, it was a long time coming.  I had tried biking full-time in Rhode Island, but the roads were too narrow; I tried in New Orleans but the rain and the humidity soaked my attempts.  My attempt wasn't a sudden jump, even though it may have seemed like it was from an outside perspective.

But would my change bring about change in the family's transportation?  At first NOPE.  For sure, it was winter.

Over the last four years, however, 2-3% change started began to happen.

Then we started biking to the lake.  CHECK.

Then we biked to get ice cream.  CHECK.

Then we biked to church.  CHECK.

Then the Voice of Reason wanted a new bike.  CHECK.

Then the kiddos started riding bikes to school and to see friends. CHECK.

Then the Voice of Reason and I started riding bikes for dates: to the Guthrie, to a Twins game, to the Orchestra.  CHECK.

Then the kids and Voice of Reason got lights and cycle computers (for distance and speed and time).  CHECK.

Then everyone got racks for the back of their bikes to haul books and groceries.  CHECK.

Then everyone either purchased, was gifted, or won a "buff". CHECK

Then yesterday afternoon (because our van was getting worked on) the Voice of Reason and I pedaled to Judson Memorial Baptist Church for the Choir's presentation of the Faure Requiem then we pedaled over to the Seward Co-Op for grocery shopping.  Big deal you might say.  Oh yeah, here is the big deal: it was cold yesterday and the Voice of Reason does not like the cold and vowed never to bike when the air temp or feels like temp was below 28!  Yesterday evening it was 33 with a feels like temp of 17!!! 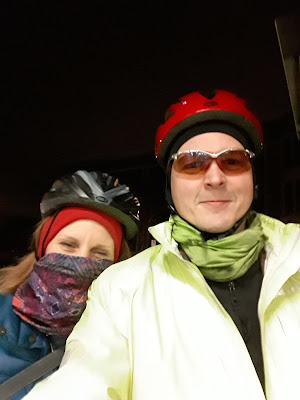 Now one kid wants their bike to be winterized, and the VOR wants windproof biking gloves.

Dear Divine this 2-3% rule is amazing!

We still own a van; we still drive approximately 10,000 miles a year; our kids still aspire to get their driver's license; but over time...